DEGNZ is excited to be hosting “From Hungary to Sundance: An Evening with Sudance Artistic Director Gyula Gazdag,” a discussion and Q&A facilitated by producer Fiona Copland.

Hungarian film director and Sundance Artistic Director Gyula Gazdag has a number of feature films to his credit including A Hungarian Fairytale (1987), which won the Special Jury Prize at the Locarno Film Festival, was named one of the year’s 10 Best Films by the Village Voice and Best Feature Film of the year by the Hungarian Film Critics Awards. It also screened at 20 film festivals worldwide, including the Directors’ Fortnight at Cannes. Gyula’s other feature films and documentaries have received wide acclaim. In addition to this, he’s worked as a professor at the UCLA School of Theater, Film and Television and has served as the artistic director of the Sundance Filmmakers Lab since 1997. He was a long-time advisor to the Binger Institute, and is currently also a mentor at Berlinale Talents.

Fiona Copland is a producer (and former ED of DEGNZ) with feature film credits including Topless Women Talk About Their Lives(1997), The Price of Milk (2001), The Strength of Water (2008) and Matariki (2010). She’s currently working on Chief Gary.

Our Rehearsal Room with Peter Feeney on Saturday the 20th of February was a great success. Thanks to our member directors Roberto Nascimento, Jane Sherning Warren, Lucy Suess and Mandalina Stanisich, and to all the actors who took part. Our next Rehearsal Room is taking place in Christchurch on April 9 – register your interest here.

Here are some photos from Saturday. 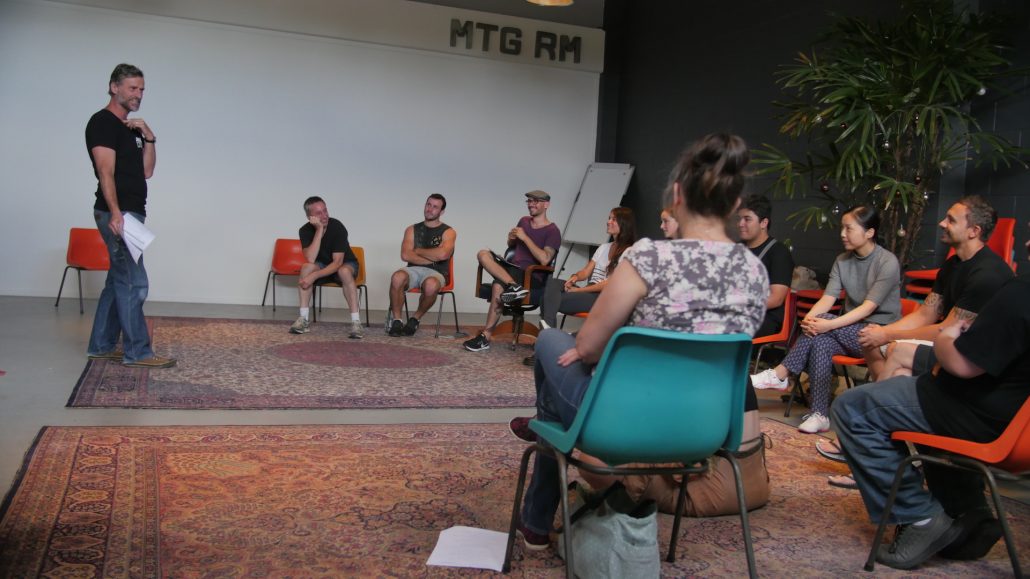 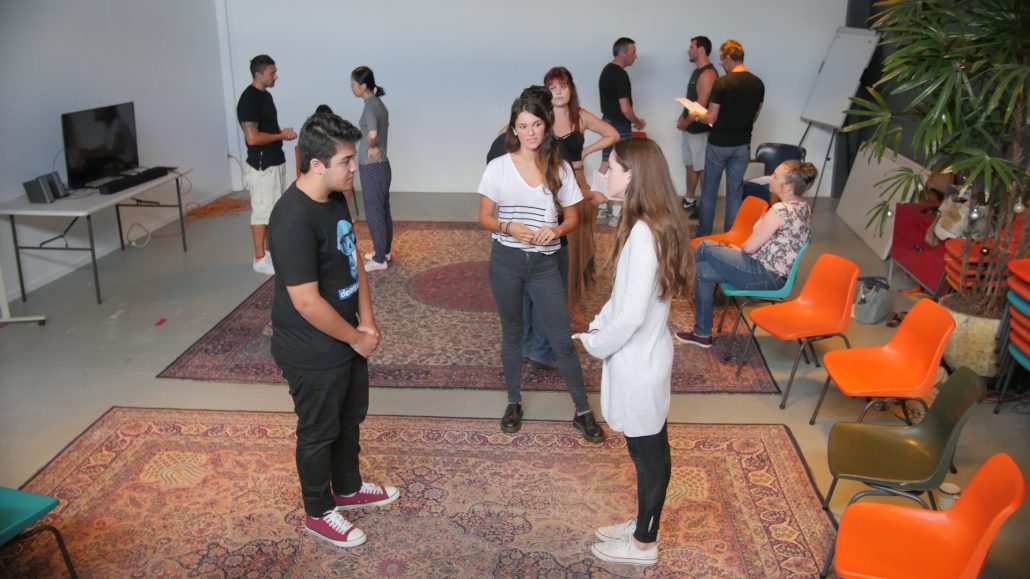 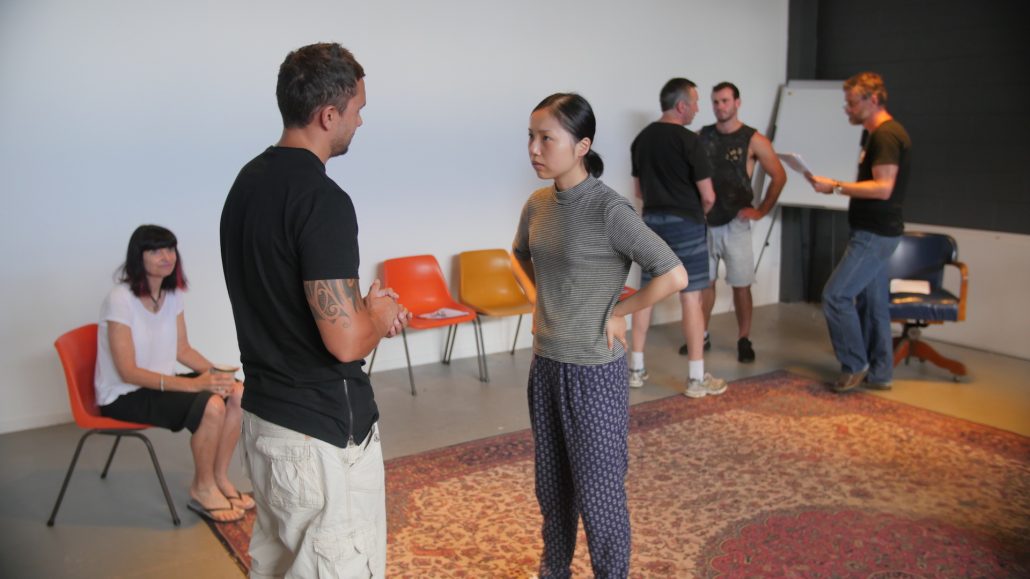 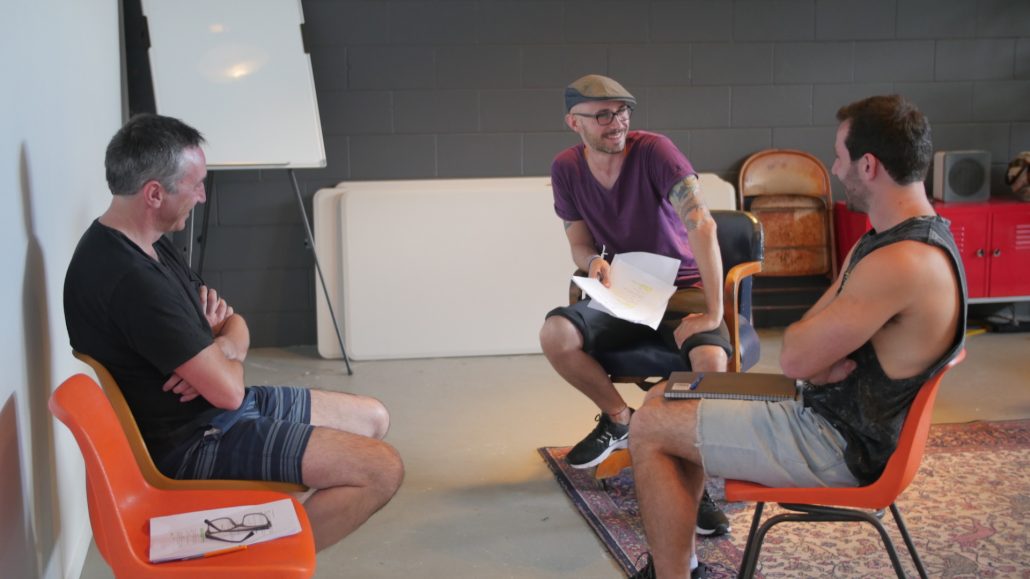 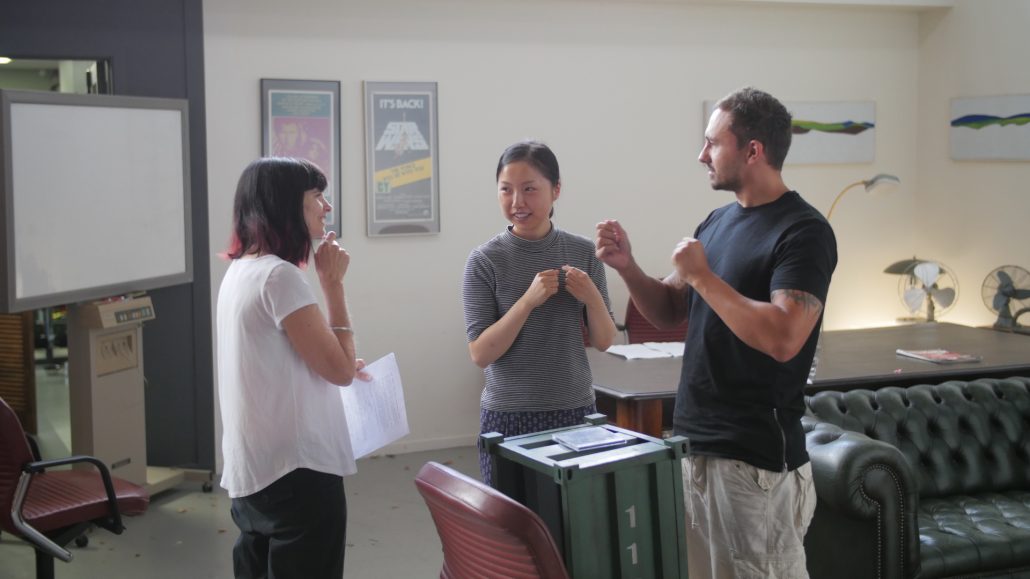 Nathan has been ranked as one of the top 10 directors in Asia/Australasia, has taken out Cannes Lions Emmy Awards, and has directed ads for some of the world’s biggest brands including Honda, Samsung and Cadbury, as well as Sky, Royal London, T-Mobile, and a little closer to home, State Insurance. See some of his work here: http://www.nathanprice.com/

Here are some photos from the event – and thanks to board member Kezia Barnett for facilitating the chat. 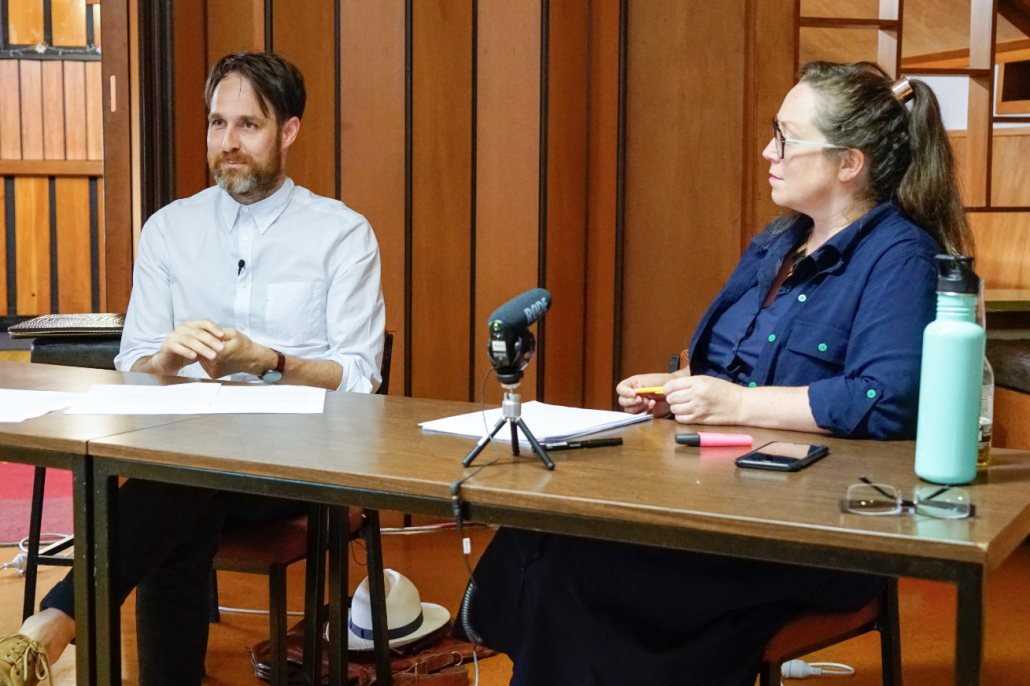 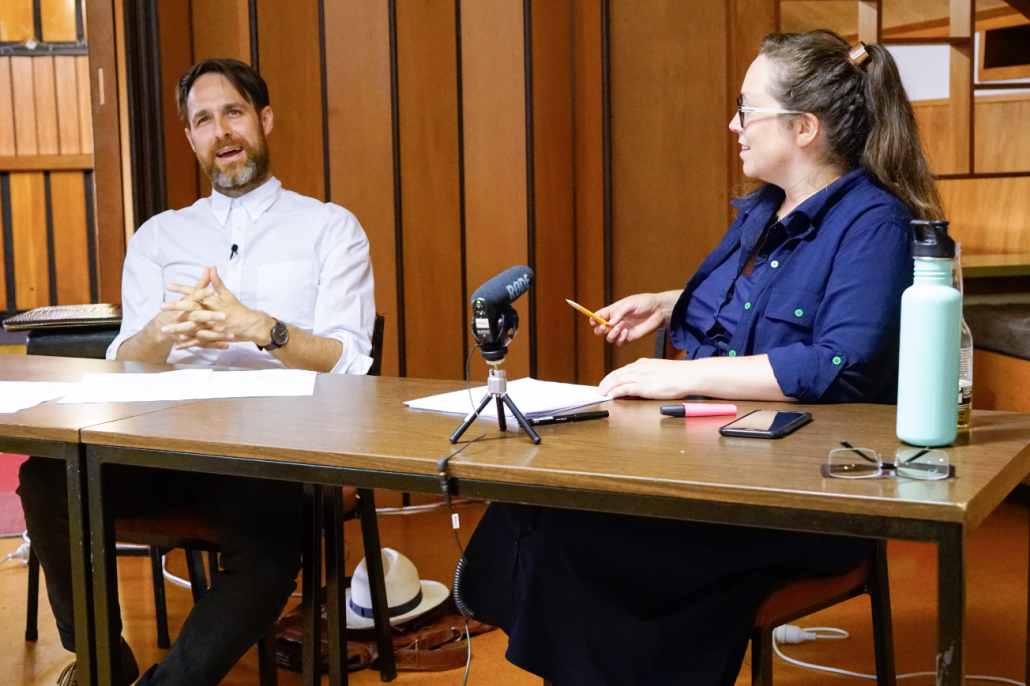 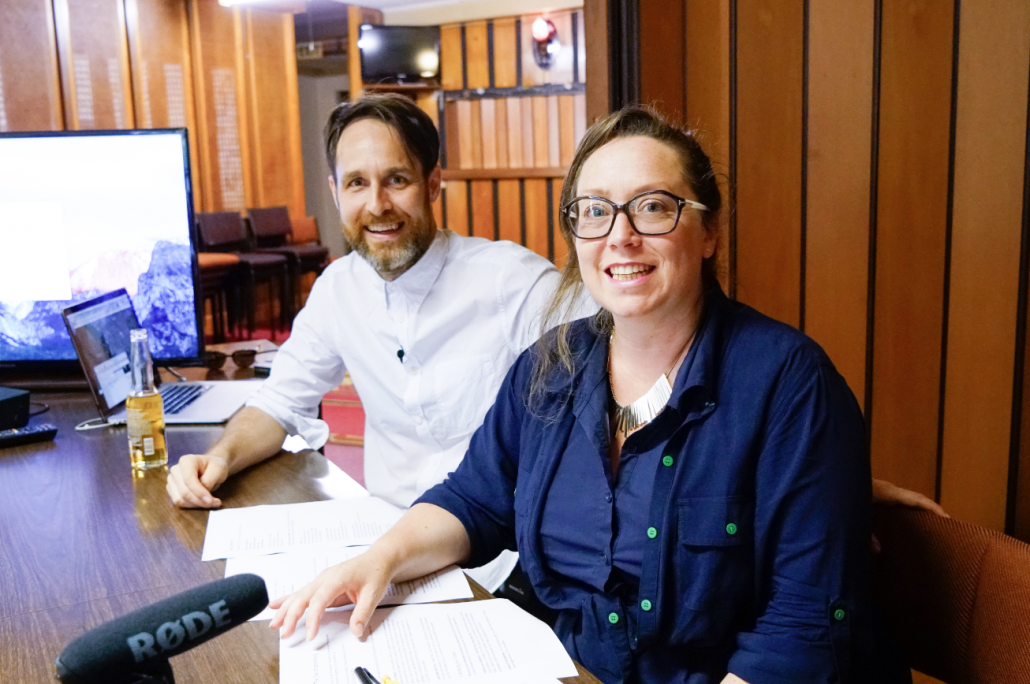 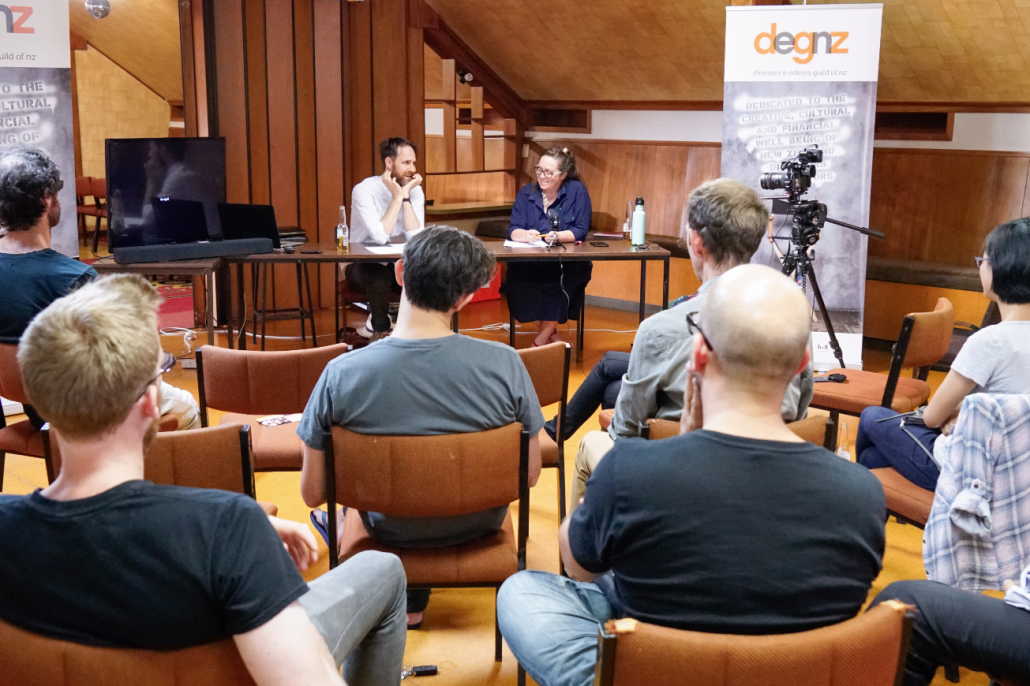 The news about New Zealand films at Sundance is good.

Taika Waititi’s Hunt for the Wilderpeople (Premieres section) prompted a bidding war, which The Orchard ultimately won for a reputed US$2 million.

While Taika is a Sundance darling and it helps that he is about to helm Thor, he deservedly wins both accolades and box office success with his films. Wilderpeople as those who have seen it assure me, is his broadest audience film to date, is both funny and touching, has an international market and Sam Neill. No wonder it got picked up, particularly when past Sundance deals indicate films that get very good prices are usually audience-friendly comedies (Hint 1).

The success of Tickled shows that there is a place for thematically unique and well-crafted documentary features at Sundance no matter where they are from (Hint 2).

The purchasers of the two Kiwi films are traditional distributors looking to the typical theatrical route and then ancillaries.

Of the 31 films at Sundance to date that found buyers, 9 were feature documentaries. If you dig into the 31 films a little further, however, you see that most of the dramas have either the director or the cast going for them in commercial terms, whether its Casey Afleck in Manchester by the Sea, Ellen Page in Tellulah, Paul Rudd in The Fundamentals of Caring, Chad Hartigan’s Morris from America, Todd Solonz’s Weiner-dog, or the highly experienced and recognized casts from TV in such films as Equity, The Hollars, and Sleight (Hint 3). Only two films—Sand Storm and Braham Naman (Comedy-see Hint 2) –are from non-US emerging talents, finding a place in the World Cinema section, while Under the Shadow, a U.K. film, scored a slot in Midnight, where Turbo Kid and What We Do In The Shadows previously found homes (Hint 4).

Thinking about Sundance in these terms, the road for New Zealand dramatic features still seems difficult unless you are a breakout talent and/or you can get top international profile cast in your film, while the growing interest in feature documentaries would seem to offer Kiwis opportunities.

What really shook up the 2016 Sundance though was the dominating presence of two streaming entities, Netflix and Amazon, quite distinctly different from each other.

Amazon, with the influence of producer Ted Hope undoubtedly at play, has a strategy of pursuing theatrical first with a quick follow up with streaming to their subscriber audience.

Netflix experimented with a day-and-date into theatres and online simultaneously with Cary Fukunaga’s Beast of No Nation. Cynics say this was just an Oscar play. Whether or not they take the same approach with the three Sundance films they took All Rights for—Under The Shadow, Audrie & Daisy and Brahman Naman—or go straight to SVOD with no theatrical, is unclear.

Both company’s approaches earn the ire of theatrical exhibitors who lose potential product to Netflix when they take All Rights, and who are not enamoured of the short exclusive window (or day-and-date no window) that is part of the Amazon strategy. Distributors are on the sidelines fretting.

A lot has been written in the Trades and elsewhere about the impact of the streamers at Sundance. A recent article by staff writer Julia Greenberg in Wired outlines I feel the positives about why New Zealand filmmakers can feel optimism about what’s happening with film internationally, and a couple of negatives.

Greenberg points out that with the cost of filmmaking dropping, there are more independent filmmakers and thus more films, increasing competition for theatrical release among themselves all the while having to compete against the studios. What Netflix, Amazon and other streamers have done to counter this is provide an audience on effectively a digital arthouse circuit that doesn’t depend on bums on seats for success. With tens of millions of viewers already subscribed, such services are less inclined toward finding blockbusters and more interested in offering a wide variety of content to make sure they have enough of everything to attract anyone.

And they have as strong an interest in documentaries—particularly Netflix—as in drama.

Greenberg adds that Netflix through content like Orange is the New Black, Beast of No Nation and the Iranian (UK) horror film Under the Shadow shows it’s interested in diverse casts, non-traditional storylines and has an appetite for films that play well around the world.

This has got to be good for Kiwi filmmakers.

Even better, for those films they are interested in, the aggressive streamers are driving up the sales prices, either securing the films or forcing distributors to pay more.

On the downside, though, is the fact that streamers don’t reveal their audience data, effectively shutting you out from knowing how well or not your film performed. This makes it harder to fund your next film when investors don’t know how well your first one did; the sales price to the streamer the only indicator and not a reliable one for futures sales prices.

In a further signal that things might be looking up for us, The Film Collaborative points out that mid-budget films have risen from the dead with the likes of Brooklyn (US$10mil), Spotlight (US$20mil), Room (US$5mil), and The Big Short (US$28mil) up for Oscars. With the film commish supposedly wanting to play in this space, that’s another positive.

So how does an emerging Kiwi filmmaker come up with a film of Sundance potential, a mid-sized budget and an internationally attractive cast?

The answer may be coming sooner than you think (Hint 5).