It’s been a helluva busy year, and I’ve been offshore more than once, the latest in October when former head of the Council of Trade Unions Helen Kelly died of lung cancer.

I never met Helen Kelly. I only knew her from the media as she fought her fights as a fierce champion of workers’ rights.

In the screen industry, she is probably best known for her intense opposition to Warners Bros’ ultimately successful efforts to get NZ employment law changed to have movie workers classified as self-employed contractors.

Perhaps more pertinently for all of us, Helen Kelly’s fight for improved health and safety conditions for NZ forestry workers undoubtedly helped contribute to the H & S changes that came into effect on 1 April of this year, which will make screen industry workers safer on set.

I wanted to acknowledge Helen Kelly because although the passage of the Employment Contracts Act in 1991 effectively rendered unions irrelevant and put most workers into a situation of selling their labour in a private transaction under an individual contract, she continued to passionately pursue an agenda to make it easier for unions to represent workers and negotiate collective employment contracts.

Helen Kelly’s fight is in essence every guild in New Zealand’s fight.

All of our members negotiate individual contracts for their employment, and most often are at a distinct disadvantage when doing so. They have no job security. And are under increasing pressure to do more for less.

As a guild one of our roles is to seek to ensure a fair and respectful workplace environment for our members. We can only look at the Directors Guild of America’s situation with envy.

The DGA as a union negotiates collectively on behalf of its members, setting pay rates for DGA productions. They protect the creative rights of directors and ensure residuals for ongoing compensation for directorial authorship. Healthcare and pension plans are just some of the other benefits of DGA membership.

Like the NZ unions, the DEGNZ’s efforts for worker’s rights are made difficult by our deregulated labour market. And because of this we can look to Helen Kelly’s approach to making unions relevant for guidance in how to move DEGNZ forward: make it a social movement with a set of values and activities that people will want to be associated with.

All of us at DEGNZ—board members and workers—seek the best working environment possible for career directors and editors in New Zealand.

At board level we are engaged now in discussions that have will have a significant impact on future working conditions for our members. And at the Annual General Meeting this weekend, NZ on Air CEO Jane Wrightson will speak to one such topic—the restructuring of NZ On Air’s funding strategy. As we approach this and the many other current and future issues that we will have to deal with, we can look to Helen Kelly’s no-nonsense approach for inspiration.

This paid attachment is currently scheduled to take place for four weeks this year commencing November 17 until December 14. It may include a small stand down period to allow for breaks in the schedule, with the aim of the Attachment getting to experience pre-production, production and post production on a major drama production.

The successful candidate will attach to one of New Zealand’s most experienced drama directors and long-time Shortland Street director, Geoffrey Cawthorn.

To apply, please download the application form cover sheet from the DEGNZ website here, and submit the following in electronic form ONLY (Word file or PDF) by 5PM Friday 28 October, 2016 to admin@degnz.co.nz with SHORTLAND STREET in the subject line:

UPDATE – CHANGE OF VENUE for WELLINGTON

As Dragonfly has unfortunately been cordoned off because it backs on to the Reading Carpark, the Wellington Christmas Party is relocating to:

Date remains unchanged. We look forward to seeing you there!

Join us for a drink and some nibbles to celebrate another great year! The Guilds Christmas parties will take place in Auckland (November 29) and Wellington (December 7).

Check out our posters below for further details and please RSVP on Eventbrite with the links below.

RSVP and presentation of your DEGNZ membership card are required to gain entry on the night. 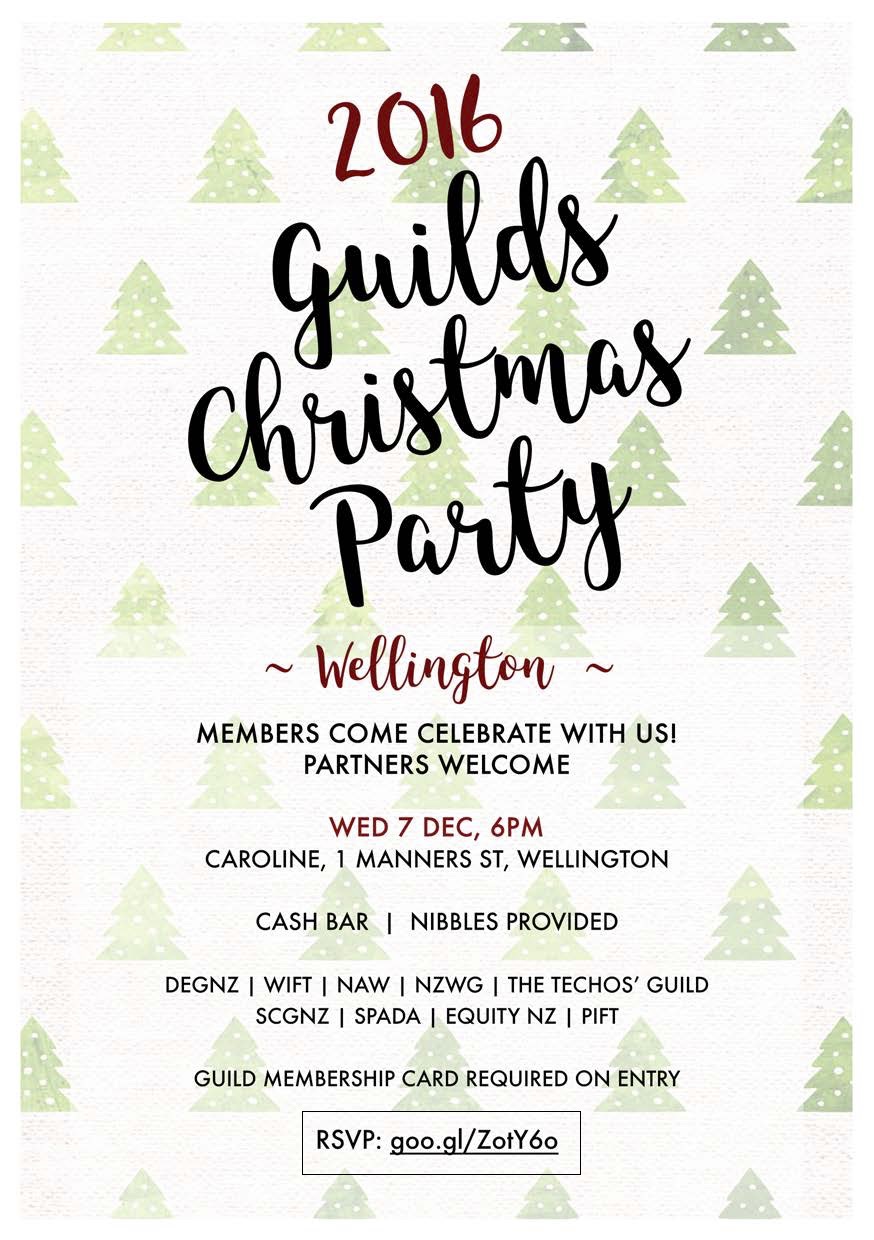 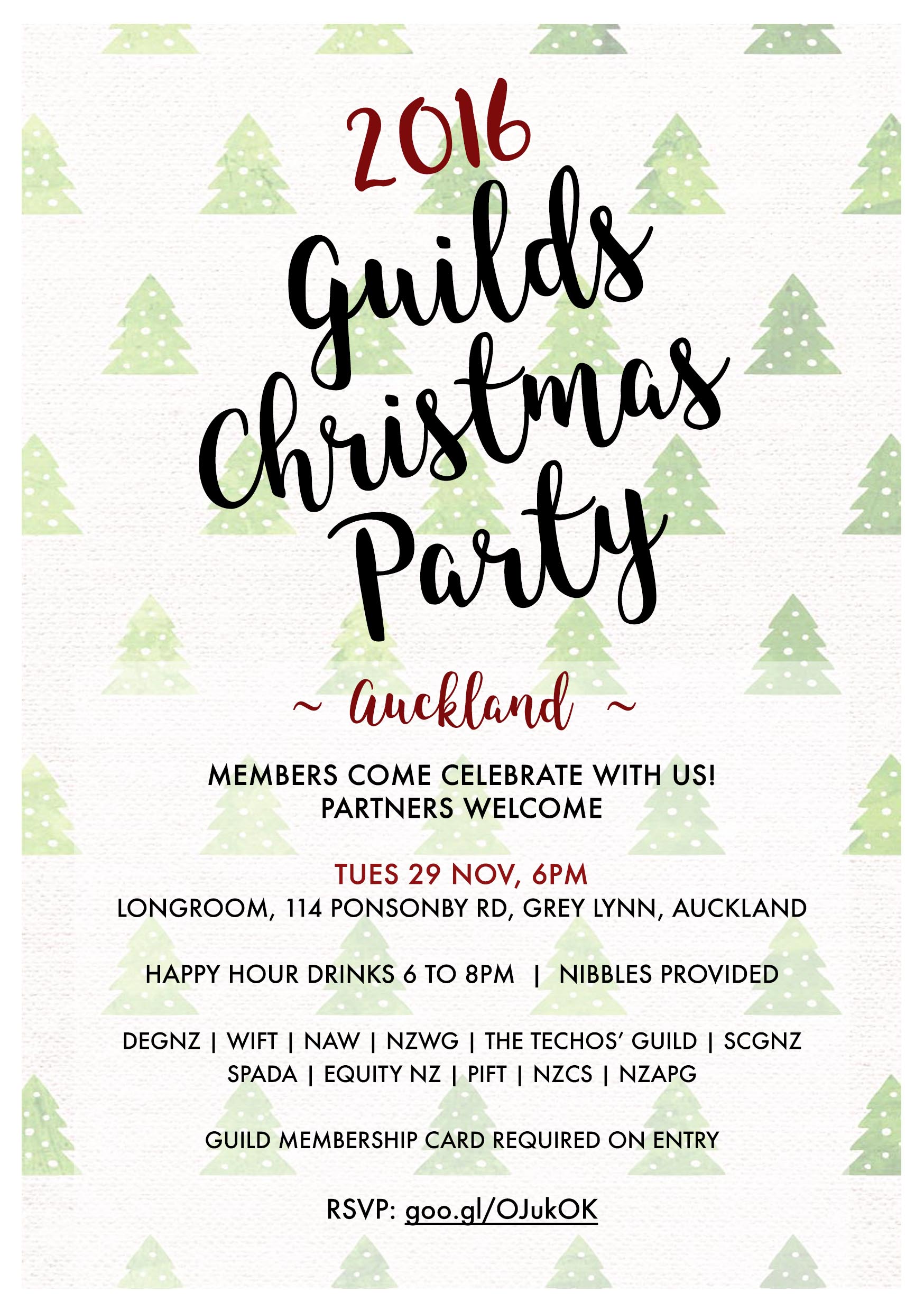 Sound and music has a significant influence on the viewer’s experience. DEGNZ warmly invites members of DEGNZ, WIFT and NZAPG to hear from acclaimed screen composer and Kiwi music veteran Karl Steven as he shares on composing for film and TV.

Karl’s original scores, to name just a few, can be heard in How to Murder Your Wife, Bombshell – The Sinking of the Rainbow Warrior, The Blue Rose and drama series Tatau for BBC Three and BBC America. Former Supergroove frontman, Karl’s credits encompass the scores and music supervision of numerous drama series, telefeatures, documentaries and films both feature length and short. This year, his work on 800 Words won him the APRA Best Original Music in a Series trophy at the Silver Scroll Awards.

Award-winning Australian editor Dany Cooper ran a fantastic weekend masterclass for our member editors at Unitec campus, Auckland on 1 to 2 October. Dany is one of Australia’s best-known and respected film and television editors with a wealth of experience from working in Australia and internationally, most recently on the soon to be released U.S. film Measure of a Man.

A huge thanks to Dany for her generosity and insights, which were appreciated by all who attended.