A core cast – max six actors – together with a writer & director team (OR writer/director) will collaborate on each script-in-development table read.

DEGNZ members and/or NZWG members are invited to apply for the script component to go into the draw for a day-long table read*. The script must have a director attached and have been through a development process.

Writer & Director teams: both must be members of NZWG/DEGNZ

Writer/director: must be a member of NZWG/DEGNZ

A Joint Initiative brought to you by NZWG, DEGNZ & EQUITY Foundation. With warm thanks to the New Zealand Film Commission.

The Rehearsal Room with Ian Hughes will kick off our 2017 Professional Development programme!

“Directors need as much practise… spending time with actors as they can get. It’s such an important relationship and so often writer/directors, especially, spend so much time by themselves with a script… and very little importance is placed on being able to direct actors. So MORE of this type of workshop please!” – Past participant

REGISTER on our event page to have your name in the draw to participate. For each event 4 directors and 8 actors will be selected. ONLY Actors Equity actors and DEGNZ directors are permitted entry to The Rehearsal Room.

You need only register once. Your name will remain in the draw for future Rehearsal Rooms unless you ask us to remove it. If you are selected, we’ll email or phone you to confirm your participation.

Moderator – Ian Hughes
For this workshop, we are pleased to have highly experienced actor and director Ian Hughes facilitating. Ian is a well-known actor (Topless Women Talk About Their Lives, Shortland Street, Go Girls, Xena, City Life, Lord of the Rings) who has worked with many of New Zealand’s directors and turned his hand to directing (Shortland Street, Step Dave).

Who is The Rehearsal Room for?
Professional actors and directors. It is open to Actors Equity and DEGNZ members of all levels of experience, from novices to virtuosos.

Material
Directors will be asked to provide a two-character scene (2 pages) or, if you prefer, a scene will be provided for you. Directors and actors will receive scripts in advance.

Structure of the event
Directors and actors will spend time rehearsing their scenes, with emphasis on connection and content.

I hope that you all had an enjoyable Christmas and New Year’s holiday period, whether you were working or relaxing.

Next week I am going to be talking with my counterparts at the Australian Directors Guild (ADG), the Director’s Guild of Canada (DGC) and the Directors Guild of America (DGA). It will be a good opportunity to discuss the issues affecting directors in each of our territories. More importantly, it will be a reminder that we are all part of a global network of bodies representing directors in the screen industry. And this prompts me to look at a change-up in the editorial for the newsletter in the year ahead.

While I will continue to voice my thoughts and opinions on local issues, I also want to link into the mix international news, issues and developments that will hopefully be of interest and that may well affect directors and editors in New Zealand.

We are working now in a global economy in the screen industry. International productions are a mainstay of the New Zealand production scene. At the same time, we have more and more Kiwi screen workers and companies travelling the globe pedalling their services and products.

As many of you know, I have made a considered effort to strengthen our relationship with the Australian Directors Guild, and more recently Australian Screen Editors. As part of this we have as previously announced securing a seat on the ADG-affiliated Australian Screen Directors Authorship Collection Society (ASDACS) board for DEGNZ board member Grant Campbell, thanks to the kind invitation of the ADG. (All DEGNZ directors should be members of ASDACS–it’s free and there could be a pot of gold (small) at the end of this rainbow.)

As screen working relationships strengthen across the Tasman, we need to be well positioned to represent the membership effectively. For this reason, I will be talking more frequently about our Australian colleagues activities.

To kick things off, I made mention last year of the fight the ADG had with Freemantle Media, who had hired a Canadian director to work on iconic TV series Picnic at Hanging Rock. After much action on the ADG’s part there was a shift in Freemantle’s previously intransigent position as outlined here.

It’s comforting to see that Screen Australia proposes changing its guidelines to guarantee that direct funded television projects are required to use Australian or resident writers and directors. We expect the same from NZ On Air.

I have just learned that the long-time National Executive Director of the DGA Jay Roth has announced his retirement. Jay has been responsible for many considerable achievements at the DGA including managing the organisation through the incredible change that has come about due to digitization. You can read about Jay here.

A couple of other issues I have mentioned frequently are copyright and fair remuneration. Our British colleagues at Directors UK were recently in Strasbourg lobbying the European Union as the European Parliament considers amendments to the EU draft directive on the Digital Single Market. You can read more from Directors UK on this here.

The issue of fair remuneration is much closer to home for us as ADG have been working with Writers and Directors Worldwide on their and our behalves to help ensure fair remuneration for directors, particularly around secondary rights.

I hope in the newsletters to come you feel a greater sense of community with your directing and editing colleagues internationally, and realize that thinking globally and acting locally is particularly relevant for us here now at DEGNZ as the screen industry worldwide continues to morph.

Wishing you the best in the year ahead.

The Directors & Editors Guild of NZ, NZ On Air and Filthy Productions are thrilled to announce actor and director Abigail Greenwood as the TV Drama Director Attachment on the Filthy Rich TV series.

When other commitments arose, we immediately thought of Filthy Rich, should a second season eventuate, believing Abigail a good fit with the show.”

Abigail attaches to experienced director Michael Duignan, whose past credits include Mighty Morphin Power Rangers, The Blue Rose, Agent Anna, and the first series of Filthy Rich. She has joined the production this month as they get underway in Auckland. Filthy Rich is produced by Steven Zanoski for Filthy Productions Ltd.

“I’m really excited to watch this very successful team do what they do so well, and stoked to be shadowing Michael Duignan, who I admire for his bold and inventive directing style,” said Abigail Greenwood.

It’s such a privilege to be given an internship as a director, so huge thanks to DEGNZ and Filthy Productions for this amazing opportunity.”

“We are delighted to again support an up and coming woman director to develop her skills under the mentorship of an experienced director, in the hope that we can see more women directing content for our screens in future,” said NZ On Air Chief Executive Jane Wrightson.

“Abigail brings her signigicant experience as an actor and her directing success with short films including Eleven, which was selected for the Berlin International Film Festival to the attachment,” said DEGNZ Executive Director Tui Ruwhiu.

“She is one of a number of talented early-career women directors coming to the fore and we are thrilled she has this opportunity to further her directing experience.”

Filthy Rich tells the story of three illegitimate children who discover they each have a claim to the fortune of one of NZ’s wealthiest men, John Truebridge. With so much money on the line, John’s legitimate family will do anything to stop these new, unexpected heirs! This Filthy Productions 14 x 1-hour drama is in its second series on TV One.

The DEGNZ TV Drama Director Attachment Scheme is now in its second year and Abigail has secured the sixth director attachment through this initiative, funded by NZ On Air and the production company involved and managed by DEGNZ. It is intended to give emerging drama directors the opportunity to shadow an experienced director through the pre-production, production and post-production process as a means to improve their craft skills. There is also an opportunity to direct one or more scenes during their attachment, at the discretion of the series producer and episode director.

Abigail Greenwood is an award winning theatre director and filmmaker from Auckland, New Zealand. Over the last ten years she has been working as a director, actor and production and costume design assistant in New Zealand film, theatre, and television.

Abigail has worked as a co-ordinator and assistant to Kirsty Cameron on The Hopes and Dreams of Gazza Snell, Lovebirds, Sione’s Wedding 2, The Weight of Elephants, Field Punishment No. 1, Slow West, and recently The Rehearsal.

Theatre directing credits include collaborative works The Height of the Eiffel Tower (New York Fringe Festival 2010, Silo Theatre, Edinburgh Fringe 2014), and Nick (Edinburgh Fringe 2013), as well as And Then You Die by Thomas Sainsbury and Cow by Jo Randerson for Auckland Theatre Company’s Young and Hungry.

Filthy Productions Ltd is a production company recently set up by Rachel Lang, Gavin Strawhan and Steven Zanoski. The company’s focus is production based, with a philosophy that the best television drama and comedy is always driven by the creatives. Productions to date are Filthy Rich and Dirty Laundry, both for Television New Zealand. 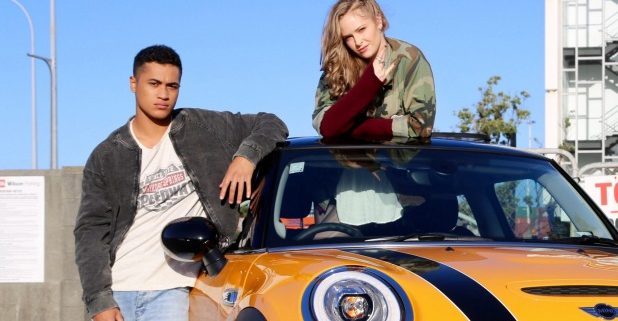 DEGNZ and Rialto will be hosting a special Film Talk for Pork Pie on the day of its release. Join us for the film, followed by a Q&A with producer Tom Hern as he chats to Leanne Pooley.  Book your tickets here.