I was considering what to write about this week when an email came in announcing a possible strike by the Writers Guild of America (WGA).

It was 2007 when the WGA last went out on strike. It lasted for 100 days. They were finally able to win one concession from the Alliance of Motion Picture and Television Producers that saw them achieve for the first time a percentage of digital revenues—they had been completely denied any financial benefit on video and later DVD and bluray revenues and consequently missed out on what had been a far greater revenue stream for the studios and producers than box office. (We can by the way thank this strike for the rise and rise of reality TV.)

The WGA is a union, and in the US they are able to collectively bargain with producers regarding contractual terms and conditions.

The Directors Guild of America (DGA) and the Motion Picture Editors Guild (MPEG) are like the WGA, a union that collectively bargains on behalf of its members. Through the efforts of the American guilds including the Screen Actors Guild (SAG), their members have been able to get healthcare plans, pensions, and for some residuals—a share of revenues generated whenever producers sell programmes or films that have been made with their creative efforts.

In New Zealand, it is illegal for workers in the screen industry to collectively bargain. This came about because of what is commonly referred to as the ‘Hobbit Law’, which was rushed through parliament by the government in 2010 as part of a deal between Warner Bros and Government ministers to keep The Hobbit film production in New Zealand.

In essence, the law means that screen industry workers cannot be considered employees and therefore are unable to collectively bargain. Screen industry workers are classified as contractors. And when contractors come together in a collective manner to determine pay rates they are deemed to be price fixing in a cartel-like manner, which is illegal.

Here from the Employment Relations Act 2000 is the relevant information:

(1) In this Act, unless the context otherwise requires, employee—

(a) means any person of any age employed by an employer to do any work for hire or reward under a contract of service; and

(i) a homeworker; or

(ii) a person intending to work; but

(c) excludes a volunteer who—

(i) does not expect to be rewarded for work to be performed as a volunteer; and

(ii) receives no reward for work performed as a volunteer; and

(d) excludes, in relation to a film production, any of the following persons:

(ii) a person engaged in film production work in any other capacity.

Author and playwright David Macaray writing in 2013 on the 2007 – 2008 WGA strike in the Huffington Post characterised the stoush as the “ …classic case of Labor vs. Management. The writers vs. the producers. Those with talent vs. those with money. Proletariat vs. bourgeoisie. Oppressed vs. oppressor. Surfer vs. ho-dad.”

Later in the same article he suggested readers: “ …take a moment and ask ourselves why so many of us root for the Establishment. For a country that, historically, has taken great pride in embracing the underdog, we seem to have lost our footing. We root for the wrong side in these labor vs. management disputes. Working people are the underdogs. All of them. Including those lucky enough to be represented by a labor union. Can’t we see that?”

New Zealand is of course very different to the Hollywood world that the American screen industry revolves around. And because the unions in New Zealand were broken so long ago, the generations that follow the baby boomers have very little if any knowledge it seems to me of what unions fought for and still seek to achieve here. Three terms of right-leaning government with a former ForEx dealer at the helm hasn’t helped. Which isn’t to say that rabid socialist ideology is the answer either. But as I look out the window in Grey Lynn at what was the residential neighbourhood of many a screen industry worker,  numbers of whom it seems are being supplanted by the Range Rover Sport, yoga pants and quinoa crowd, I have to question whether or not we’ve got it right. Are we so mislead by the now defunct American dream here, too, that we can’t see that most of us are our own worst enemies? Escalating house prices a case in point.

A New Zealand producer very recently lamented to me the difficulty of working with the Australian screen industry because they have unions, there are minimum standards and awards, and fringes to deal with superannuation, workers compensation, etc. But the Australian screen industry is on fire. Large international productions are still going there. Local production from drama to reality to information programming is booming.

The spectre of lost screen production that was used so effectively by an American corporate to change New Zealand employment law just doesn’t stack up when we look across the Tasman.

In Australia and New Zealand, production companies have been gobbled up by offshore entities because the creative talent brought to bear in our countries has proven itself both at home and offshore through the sale of the product that embodies our creativity, yet the lot of the above-the-line creative talent of writers, actors and directors is generally worse than it’s ever been.

The director’s position particularly in the New Zealand screen industry has so eroded that most director’s incomes are going down not up. Like a lot of people in a lot of other jobs. It’s fast becoming time that we need a paradigm shift in our industry and our country. Recent studies that show workers in the creative sector are least likely to be replaced by robots and software in the near term is no reason for complacency, or for accepting lower wages and poorer working terms and conditions.

Down tools like the WGA threatens? Obviously not here. But workers’ rights are meaningful. For all of us. Whether or not you own your own house.

The Directors & Editors Guild of NZ invites you to apply for a 2-day Directing Toolkit Workshop with director Rob Sarkies in Rotorua.

The workshop will be held on Saturday and Sunday, 29 and 30 April. 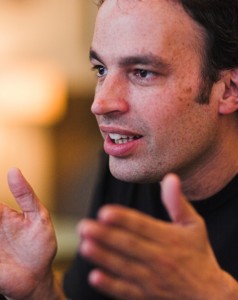 This will be a practical workshop that will take participants through Rob’s film-making process from development to shoot and examine how process can be adapted from project to project.

The workshop will cover development process (how to avoid ‘development hell’ or at least ensure your project comes out the better at the end of it). Process leading to production (script prep, visual prep, storyboards, casting process). Pre-Production (rehearsal process, binding your collaborators to the same vision) and practical process on set (scene blocking, working with cast, working with your DP).

Rob will outline his process and encourage participants to develop processes specific to them. A workshop full of practical hints to help you control the beast of a feature film rather than having it control you.

A travel allowance is available for DEGNZ members coming from out of town.

TO APPLY please send your application in ONE PDF to tema@degnz.co.nz with ‘Rotorua Directing Toolkit’ in the subject line.

Our Screenlink networking event was a great evening spent with our friends at New Zealand Writers Guild and Ngā Aho Whakaari. The highlight was hearing from Kathryn Burnett and Fiona Samuel on the night’s topic: Writing as a Career in the Screen Industry. Thanks to everyone who attended! 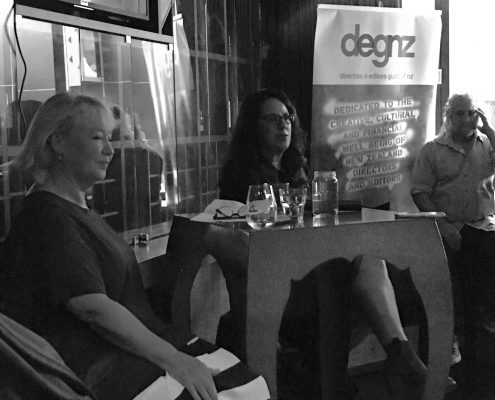 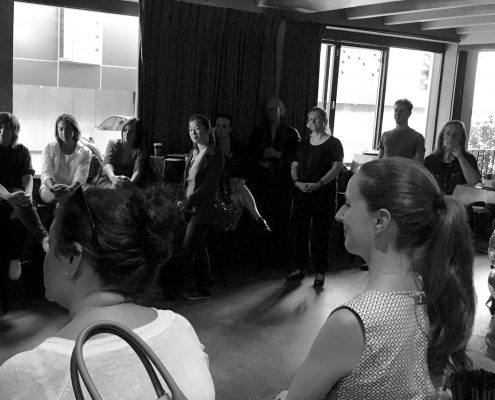 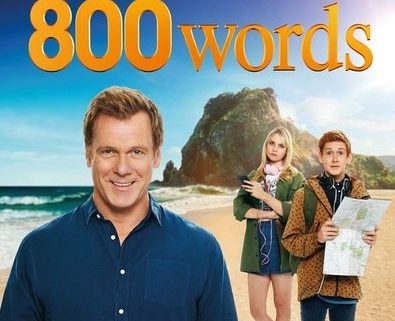 “The recent DEGNZ director’s attachment was an excellent way to learn how drama operates at SPP,” Helena Brooks said. “During the attachment I directed a couple of days on Brokenwood Mysteries, which led to 2nd unit directing on Westside. I was then asked to direct a block of 800 Words, which I’m really looking forward to. SPP is like a finely tuned instrument with a big family vibe and I really love being amongst it.”

Brooks will direct one block (two episodes) of 800 Words starting in April, and will see those episodes through post production.

“We are ecstatic that our TV Drama Director initiative has resulted in Helena moving onto fulltime directing of drama,” said Executive Director of DEGNZ Tui Ruwhiu.

“We are extremely pleased to add Helena to our roster of directors, and we applaud both the DEGNZ and NZ On Air for their support of the directors attachment initiative,” CEO of South Pacific Pictures Kelly Martin said.

“Helena’s success is heartening. I’d like to congratulate Helena on her achievements to date and hope we will see many more drama productions directed by her in the future,” said NZ On Air Chief Executive Jane Wrightson.

800 Words is a 24 x 1-hour comedy drama series produced by South Pacific Pictures and Seven Productions. The series premiered in Australia in September 2015 and quickly became the #1 drama on Australian television as well as topping the Tuesday night primetime ratings. 800 Words also premiered in New Zealand on TV One in late 2015. Erik Thomson plays George, a man who used to skate through life but who is now stumbling. When his wife dies suddenly, George makes a rash decision to move his two teenaged kids away from the big smoke of Sydney to the picturesque town of Weld in New Zealand. All he wants to do is make a fresh start but it seems that everyone – his kids, the townspeople, the universe – have other ideas. This is a Seven and South Pacific Pictures production created by James Griffin (Outrageous Fortune, The Almighty Johnsons) and Maxine Fleming (Being Eve, Outrageous Fortune). Season Two of 800 Words is currently screening on Channel 7 in Australia and in New Zealand on TVNZ One.