Directors and actors got the chance to play at Rehearsal & Performance in the weekend.

Participants received insights from director Michael Duignan (The Blue Rose, Go Girls, Filthy Rich). One main take away that Michael emphasised was avoiding results-driven directing and instead playing with different scene objectives for each actor. The more specific and concrete the objective, the better.

The focus of the day was to give directors and actors time in groups to explore a scene and work together.

Saturday’s workshop marked the first in our new Rehearsal & Performance series, the revamped edition of The Rehearsal Room. We’ve improved the format and are excited about the changes, which were positively received by the directors and actors involved, some of whom had taken part in past Rehearsal Rooms.

What hasn’t changed is our kaupapa. We still want to assist directors and actors to work better together by regularly providing a safe and supportive space for them to meet, collaborate and play. We believe this relationship is crucial to achieving the best results on set and on screen.

So… the Rehearsal & Performance series will return to Auckland, Wellington and Christchurch in 2018 after the holidays! 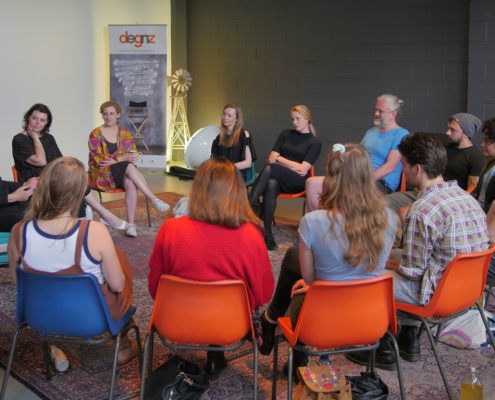 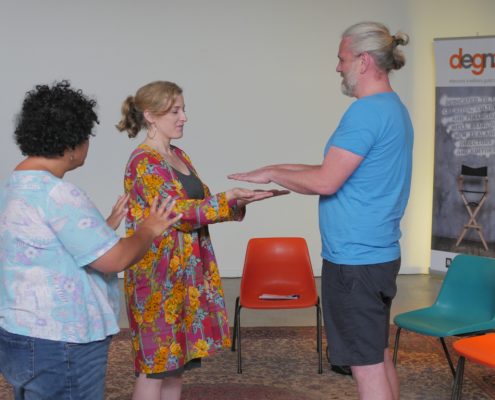 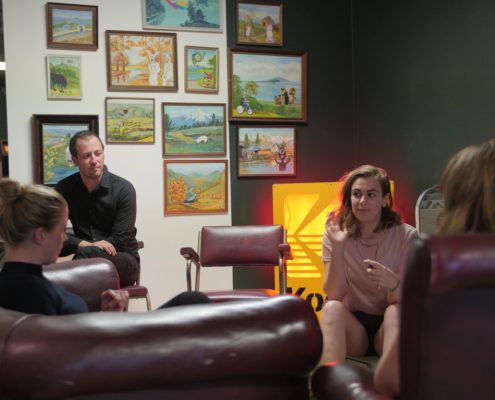 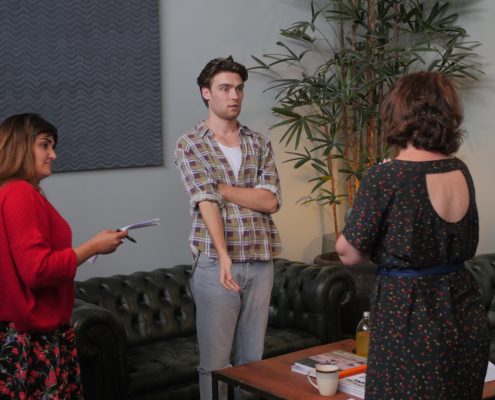 Seresin Estate, founded in 1992 in Marlborough by New Zealand cinematographer Michael Seresin, has been a supporter of the Guild for several years. Pair that with some really excellent and not your typical New Zealand wines (for instance, although many people steer clear from Gewürztraminer, Executive Director Tui Ruwhiu is always recommending Seresin’s), it’s no surprise that the Guild has long wanted to run a Seresin wine tasting for our members. 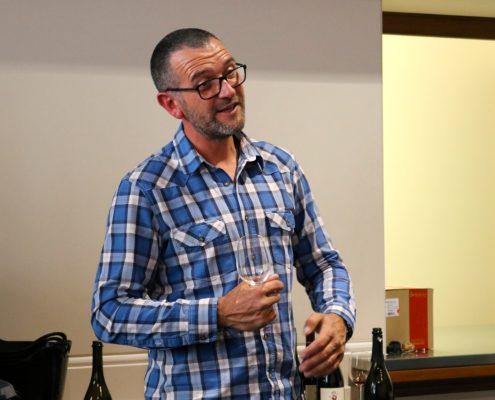 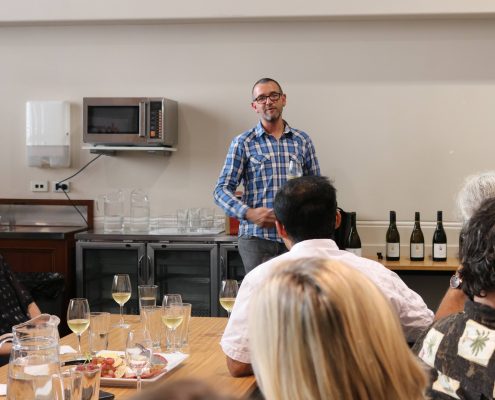 The stars finally aligned and we were able to welcome Seresin head winemaker Clive Dougall. DEGNZ was in good company with members from the Composers Guild (SCGNZ), Writers Guild (NZWG) and Screen Production and Development Association (SPADA) joining us.

With passion and humour, Clive presented half a dozen fine wines to attendees. He shared the philosophy behind their organic and biodynamic winemaking that comes out of Michael Seresin’s desire to make wine as naturally as possible.

All in all, it was a casual and informative evening, and you didn’t have to be a wine connoisseur to enjoy it. 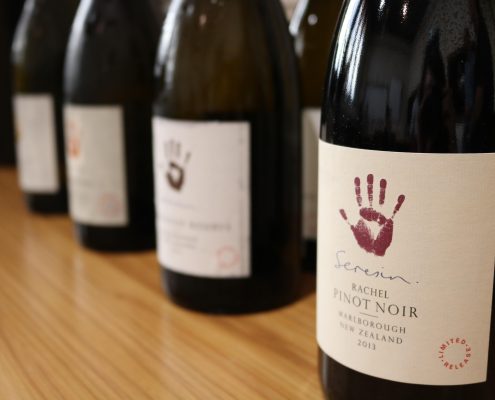 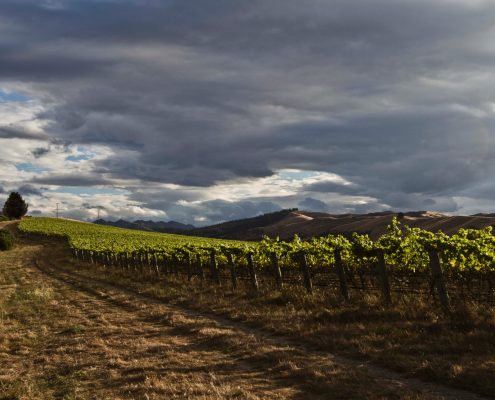 Christmas 2017 One Off Prices

In case you didn’t know, DEGNZ members receive discounts and special offers on the range of fine wines from Seresin Estate. Currently, you can save on cases of Seresin wines this Christmas if you order before 13 December 2017. See here for more details.

DEGNZ launched its new Young Creators initiative with its first event Before You Say Yes to Web Series.

Young Creators is a programme of events with a mission to inform and inspire younger or emerging directors and editors to build successful, sustainable careers in the screen industry.

The Young Creators initiative will be more career and business focused, while the Guild will continue to provide its craft-based professional development programme to members.

At Before You Say Yes to Web Series, Executive Director Tui Ruwhiu spoke in depth about the current issue of digital platforms expecting quality online series at rock-bottom prices.

Problems directors have faced include below minimum wages and a lack of creative rights and copyright. Another issue is that directors have signed contracts without properly understanding the agreement or knowing that they can negotiate for better conditions. And in some instances, directors have not received contracts until long after they have begun working on projects.

In response, DEGNZ outlined a proposed Standard Online Series Director Agreement at the Young Creators event. Tui and Tim Riley from Dominion Law highlighted and provided explanation of sections in the agreement. They also received valuable feedback that will shape the final document.

Because of the many problems that DEGNZ has heard about both directly and anecdotally, the Guild has decided to make the agreement available to both members and non-members on request.

DEGNZ will notify once the standard agreement is ready for release, and filmmakers will be able to receive a free copy by contacting DEGNZ directly.

The Guild encourages everyone to negotiation terms and conditions and get signed contracts before any work is undertaken. Everyone has a right to be compensated fairly either through purely financial terms, or a mixture of fees and retaining copyright, at the same time receiving creative control and rights for the work undertaken.

Thanks to our speakers and everyone who attended and helped make the event a success. 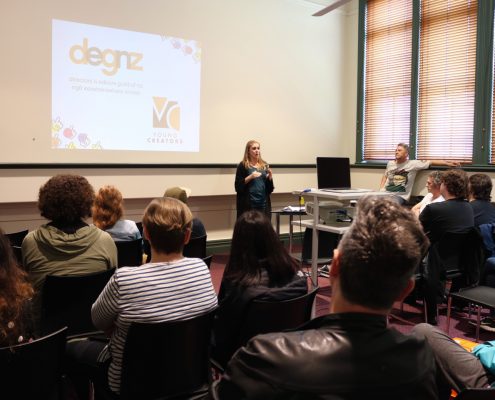 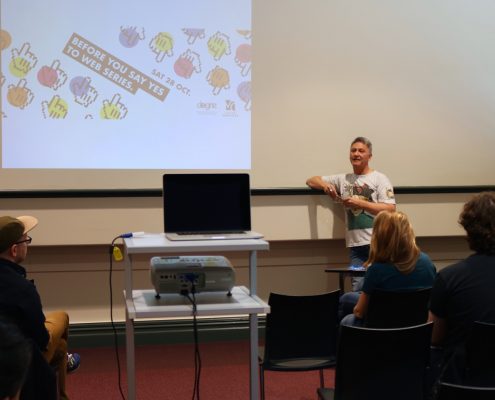 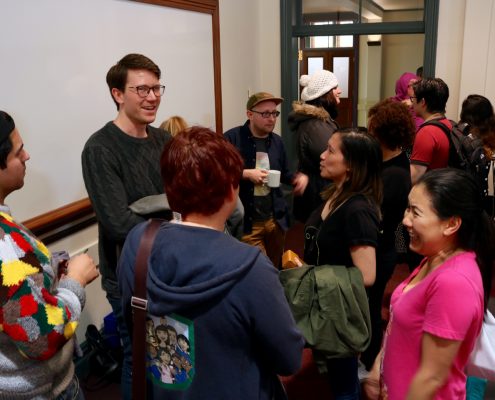 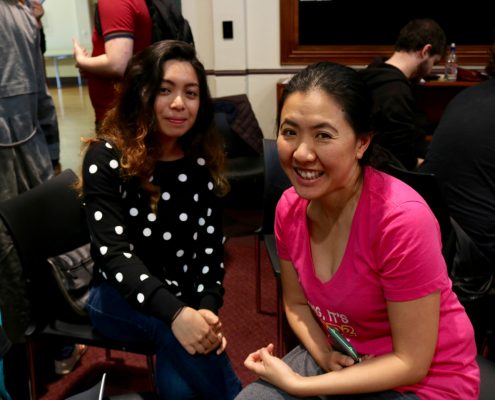 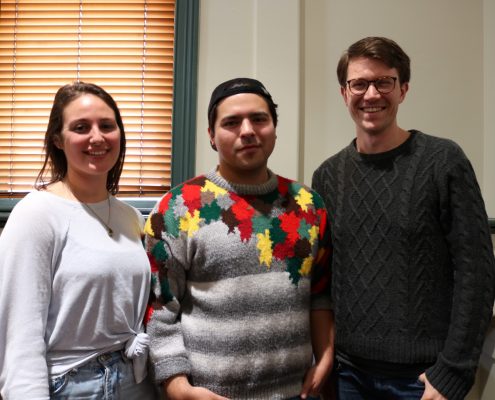 When Minister for Employment Iain Lees-Galloway told ONE News just over two weeks ago that the government would repeal the Hobbit Law, all hell let loose.

To understand why the Hobbit Law was forced on the screen industry, there’s a need for a bit of history around two key events: The Bryson vs. Three Foot Six case which was settled in the NZ Supreme Court in 2005, and the move by Actors Equity NZ to unionise on The Hobbit in 2010. And I’m going to simplify things because it’s all a bit complex and convoluted.

The Supreme Court decision in 2005 saw James Bryson classified as an employee not a contractor and therefore able to pursue a personal grievance claim against Three Foot Six, the production company that made The Lord of The Rings.

In 2010, Equity NZ made an untimely play around The Hobbit to collectively bargain to improve working conditions for actors with the support of Australia’s Entertainment union the MEAA and the Screen Actors Guild of America among others.

Sir Peter Jackson and the Techos got up in arms about the potential loss of work and revenue to the screen industry due to the actors’ actions, and the National government swung in behind the pro-business argument. At the same time, Warner Bros., the studio behind The Hobbit saw a massive opportunity to squeeze greater concessions from the NZ Government, and duly did.

The upshot was the rushed through Hobbit Law, which prevents film workers being classified as employees and therefore stops them from unionising and collectively bargaining, and supposedly providing certainty for international studios and producers when assessing NZ as a destination for film productions.

The Techos, who have recently rebranded as the Screen Industry Guild of Aotearoa New Zealand, were understandably nervous with Lees-Galloway’s announcement—their concern is about a loss of work and revenue such as was threatened around The Hobbit and which became a reality during the dry patch in 2012 and 2013 because the screen incentives for international production were uncompetitive and the NZ dollar was high. At the time, many either moved overseas or out of the industry. The National Government in 2014 finally came to the party and upped the incentives. International production into New Zealand began to flow again and our crew capability and capacity, while still wearing scars from that time, has returned.

Back to two weeks ago. It seemed like battle lines were being redrawn with the actors, together with directors and editors, stunties, and composers on one side wanting collective bargaining to improve what they view as their poor terms and conditions, the writers as a union wanting to protect the rights of workers, and the producers uncommitted. On the other side were the technicians who don’t want to see their livelihoods eroded or eliminated should the number of international productions coming here slow down or cease, while also wanting the choice to work as contractors and not employees. And driving the issue, a worker-oriented government wanting to get rid of unjust legislation that is also illegal according to an international convention NZ is a signatory to.

After an initial flurry of activity from the individual guilds we all settled down to talk and then we agreed at the government’s invitation to all settle down to talk in a working group to resolve the situation to the satisfaction of all parties. The ball is essentially now in the Government’s court to sort it out with all our input. We will keep you posted on developments.

For a more in-depth look at the issues, a recent NZ Herald article is well worth reading and I highly recommend you follow the threads and read the associated articles. You can find it here.

The finalists in the remaining categories were also announced at the Craft Awards ceremony on Wednesday. Congrats to all the finalists and to our members in the running:

Why Am I? – The Science of Us
Paul Casserly, Mark McNeill & Irena Dol
Razor Films (TVNZ1)

The announced finalists for the New Zealand Television Awards to be held on 30 November: http://nztvawards.co.nz/2017-finalists/