I was fortunate to be invited as a guest to the New Zealander of the Year Awards last night. It was an eye-opener for me. It brought home how myopic I have become with the screen industry essentially consuming my every waking hour. When I’m not thinking about and doing my job here at the Guild, I’m more often than not working on moving my own projects forward.

At the Awards I got to see and hear about wonderful New Zealanders who work endlessly, tirelessly, and often voluntarily, consumed by their passions to do work that will benefit others.

There were many wonderful characters and stories in the semifinalists and finalists we were introduced to.

Georgia Hale has represented New Zealand in four sports, and uses her position as the Captain of the Womens Warriors Rugby League team to do community work throughout the country, working with young children, rural communities, the intellectually disabled and other charities. Georgia won the Young New Zealander of the Year.

Dame Margaret Sparrow is a long-time advocate of men’s and women’s reproductive rights.  She helped introduce the morning-after pill to New Zealand, has been a trailblazer for legal abortion here and is absolutely thrilled that after decades of effort, a bill to decriminalise abortion will soon go in front of the whole House. Dame Margaret won the Senior New Zealander of the Year Award.

Bill Buckley of Buckley Systems, the world’s leading manufacturer of electro-magnets, won hearts and minds with his clear ‘Kiwiness’ and absolute passion for his latest effort. Buckley’s newest venture, Neutron Therapeutics, took on a task many others worldwide thought impossible: to build an accelerator that could be used in-hospital as a neutron source, replacing a nuclear reactor that was required to perform the same function.

Using the accelerator, Neutron Therapeutics has developed Boron Neutron Capture Therapy (BNCT) that allows the targeting of cancer at a cellular level. Buckley firmly believes that they will be able to eradicate brain tumours with the treatment. He won Innovator of the Year.

And just when you thought I’d completely moved off the screen industry, we come to actor and teacher Jennifer Ward-Lealand Te Atamira, who took out New Zealander of the Year. Jennifer was acknowledged for her ongoing dedication to Arts and Culture in theatre, film and TV and her passion for Te Reo Māori, showing through shining example her commitment to bi-culturalism and bi-lingualism in New Zealand. Jennifer, as many of you know, has run workshops for DEGNZ, passing on her knowledge and experience of working with actors. Congratulations, Jennifer, from us at the Guild!

There were other winners on the night and an equally-deserving large numbers of Kiwis who were nominated for the work they do in communities in New Zealand.

It was a breath of fresh air to put the screen industry aside and spend a few enjoyable hours hearing about Kiwi achievements from other walks of life. 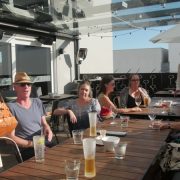