On Tuesday the government announced the appointment of former prime minister Jim Bolger to head a 10-person working group that would report back on the design of Fair Pay Agreements.

This is welcome news to me as those of you who have read my blog posts will know—I personally and also as the ED of DEGNZ, have long railed against poor pay in the screen industry, particularly for many directors, especially in the online content area and at Māori Television.

The Fair Pay Agreements that were part of Labour’s manifesto going into the election are workplace laws setting minimum terms and conditions of employment for workers in the same industry or occupation.

I along with a representative group of the screen industry have been grappling with such issues for some months. As the Film Industry Working Group, we are working to respond to Minister of Workplace Relations and Safety Iain Lees-Galloway’s objectives for the group to restore the rights of film production workers to collectively bargain, in a way that:

The Government’s intentions with the Fair Pay Agreement is, quoting from a Stuff article, “to lift pay and conditions by preventing a ‘race to the bottom’ by preventing employers from competing with each other by lowering wages.”

This is exactly the situation we have been faced with for directors in the screen industry and one the Guild has long sought to address.

Bringing Bolger in to head the panel is both ironic and considered a Labour masterstroke. It was Bolger’s government that introduced the Employment Relations Act that was considered damaging to workplace relations and, according to Economist Brian Easton, advantaged employers over workers, did nothing to raise productivity, and had next to no impact in raising real wages. See The Spinoff article here).

There is obvious concern from employers and businesses about what the Fair Pay Agreements will mean, but there does seem to be an understanding on their parts that a rebalancing is required—a sentiment that is also gaining traction with some producers and production companies in the screen industry.

National certainly seems to have come to the party… with a party, or more accurate with a concert—a benefit concert—in a spoof from the Spinoff—a cynical send up I’d welcome if it were true because the disadvantaged do need help. 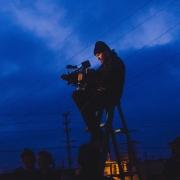