You are here: Home1 / News2 / Collaborators Series3 / Lee Tamahori and Robin Scholes Highlight How They Kept It Together 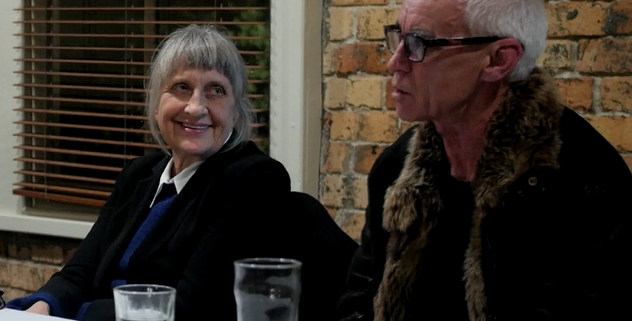 Director Lee Tamahori and producer Robin Scholes affirmed their extremely positive collaboration when they spoke at the well attended  DEGNZ Collaborators Series with SPADA at the Horse and Trap in Mt Eden last night.

They revealed their shared inexperience at making feature films when they took on Once Were Warriors and how that brought them closer together as a collaborative team.

Lee went on to great fame internationally as a director and he highlighted how his TV commercials background saved his bacon when he hit the demanding world of Hollywood.

Robin touched on her total focus to support the directors she works with as much as possible as they seek to realize their visions for the films.

Respect, trust, absolute commitment to the project and a clear deliniation of what the director and producer roles are and what they must do to fufill them, as well as the understanding of what each others roles require and the need to support the other were some of the key components they believe contribute to a successful director/producer relationship.

Colourful anecdotes and stories peppered the convesation, which proved insightful and invaluable for anyone seeking a career as a director or producer in film, particularly in New Zealand.