You are here: Home1 / Members2 / Advocacy and Lobbying3 / Do The Right Thing

Do The Right Thing: Copyright Campaign

DEGNZ has always sought copyright for directors. In 2019, the Government launched a review of the New Zealand Copyright Act. This is currently ongoing. To provide a focus for our efforts to win copyright, DEGNZ has launched the Do The Right Thing: Directors Share In Copyright With Producers Campaign.

To support the Do The Right Thing Campaign for director’s copyright you can: 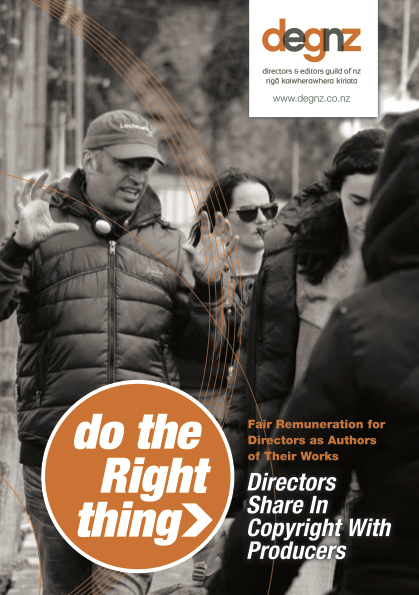 Directors are the primary creators of audiovisual content and cinematographic film. The director is the creative decision-maker in a process of artistic collaboration who takes final responsibility for the aesthetic cohesion and artistic integrity of the work.

One of the elements the director uses to create the final work is the underlying work of the screenplay. The other underlying elements include the acting, cinematography, the production design, the wardrobe and makeup, the editing, the musical score, the sound design, etc.

At no point, however, is the director’s ownership acknowledged for the new and complete work he/she has created. Under New Zealand’s Copyright Act 1994, even though the final work is the result of the aesthetic cohesion and artistic integrity of the director, the ownership of that work is vested 100 per cent in the producer as the person by whom the arrangements necessary for the making of the recording or film are undertaken.

The director is a creative author of the work, yet it is only the producer who receives copyright and therefore ownership of the work.

Without copyright, the director is not in the position of ownership that the screenwriter is in and for which he/she receives compensation for. The director cannot therefore leverage ownership to negotiate fair remuneration for the work he/she creates.

It is DEGNZ’s position that directors must rightfully share in copyright, and thus ownership, of audiovisual content and cinematographic film.

With copyright, directors can then negotiate economic rights with the producer before he/she assigns over the ownership that copyright confers.

DO THE RIGHT THING: Directors Shared Copyright with Producers