You are here: Home1 / DEGNZ Selects

Oscar and BAFTA-nominated for his work on Taika Waititi’s Jojo Rabbit and recently back from the red carpet, Tom joins us to discuss his career, his craft and his collaborations.

Tom was recognised by the American Cinema Editors with the award for Best Edited Feature Film (Comedy) for Jojo Rabbit at the 70th Annual ACE Eddie Awards held in January. Tom also edited Hunt for the Wilderpeople, What We Do In the Shadows, Jackie van Beek’s The Inland Road and for television, Wellington Paranormal, Ash vs Evil Dead and Go Girls amongst other projects. He is currently cutting Roseanne Liang’s thriller Shadow In the Cloud.

Register to reserve your seat.

We collect diversity data during registration so we can report to our primary funder, the NZ Film Commission. Any data reported will remain completely anonymous.

This event is part of DEGNZ Selects, presented by the Directors & Editors Guild of NZ

The story of the Last Ocean Campaign

Documentary filmmaker Peter Young, director and producer of The Last Ocean, will share his insights and experiences from the Last Ocean campaign, a movement that grew from a passionate few into an international environmental campaign that helped create the world’s largest Marine Protected Area in the Ross Sea, Antarctica.

Peter will talk about the importance of the film, how it was financed, produced and distributed to help create significant change. 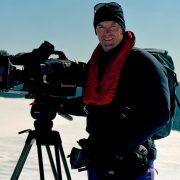 Peter Young is a director, cameraman and producer with a strong connection to the land and the people who live and work on it. In 2012, he was named New Zealand Independent Screen Producer of the Year. He has credits in well over a hundred documentaries, among them BBC’s Blue Planet Series, The Quest for the Giant Squid for Discovery, and acclaimed TVNZ series Country Calendar and Explorers.

In recent years, Peter completed and released the feature documentaries The Art of Recovery (2015) and The Last Ocean (2012). The Last Ocean spanned seven years and developed into a successful international campaign promoting the protection of the Ross Sea in Antarctica, culminating in November 2016 when 24 nations and the European Union created the world’s largest marine protected area in the Ross Sea.

Join us for an inspirational evening celebrating the power of film.

DEGNZ Selects: From Passion to Protection – The story of the Last Ocean Campaign

A DEGNZ Selects event, made possible with the support of the New Zealand Film Commission.

Finally got some free time over the holiday season? Revisit or catch up on some of our guild events from the year on our DEGNZ Channel, which is currently live. Here’s a small selection you might like:

– Film Talk: Q&A with Geoff Murphy on his seminal Goodbye Pork Pie.
– The Collaborators Series: Lee Tamahori and Robin Scholes – From Once Were Warriors to Mahana
– DEGNZ Selects: In conversation with Niki Caro
– and more!

We’ll be adding more vids in 2017 so make sure you subscribe.