You are here: Home1 / female directors

Filmed live in Auckland’s Holy Trinity Cathedral, Rebecca had just one live performance to get the film right which required a lot of careful pre-production planning, including bringing camera operators into rehearsals.

Semele is a sensual love triangle between Jupiter, King of the Gods, his wife Juno, and his lover, the mortal princess Semele.

Although the film’s premiere was back in May in Auckland, this nationwide release enables New Zealand Opera to travel from major cities to the regions. Find out more information on the film and see if it’s screening near you.

Meanwhile, Rebecca’s short film The Finding has been selected for Montecatini International Short Film Festival in Italy, one of Europe’s longest running short film festivals. The film, written and directed by Rebecca, was shot on Kodak 16mm in Central Otago and Dunedin. In The Finding, a teenager’s efforts to reconnect with her estranged father forces them to confront a secret in their past.

Water Baby (2019) documented freediving couple Sachiko Fukumoto and William Trubridge’s quest to have a water birth in the ocean. The short documentary has been watched by around 8 million people and is used by educators around the world, motivating expecting parents to explore birthing options.

Its sequel, Pacific Mother, will explore the disconnection between the global default maternity system and the needs of families. The filmmaking team are running a live Kickstarter campaign to help them raise NZD 30,000 to help finish the film, including telling the story of Aotearoa’s maternity system.

In Pacific Mother, Sachiko travels from Japan to Hawaii, Tahiti, the Cook Islands and New Zealand to connect with strong ocean women, whose interwoven stories about birth and parenthood inspire a more traditional, connected way of life.

Please support Kathy McRae’s film if you can! Find more information about Pacific Mother on their Kickstarter page. Their fundraising campaign has 19 days remaining. 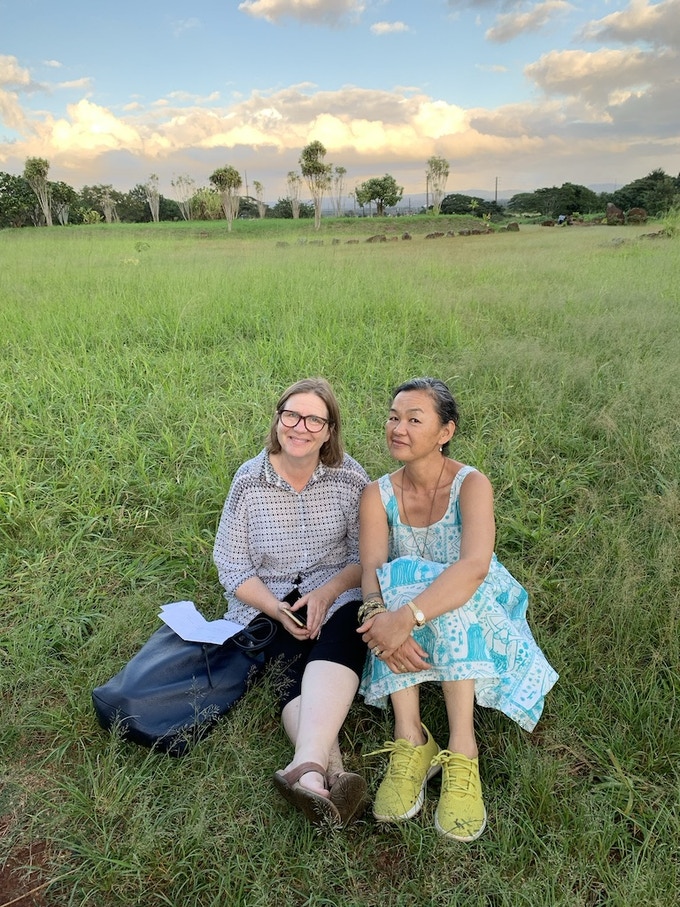 Director Kathy McRae and producer Migiwa Ozawa in Hawai’i before Covid-19 shut the borders in 2020.

We are excited to hear that DEGNZ member Roseanne Liang will serve as a director on Netflix’s live action adaptation of Avatar: The Last Airbender! The series will follow the story depicted in the original Nickelodeon animated show, set in a fictional world of Four Nations, each being home to “benders” who can manipulate elements using martial arts.

Roseanne will direct an unknown number of episodes, alongside Michael Goi (Swamp Thing, American Horror Story) and Jabbar Raisani (Lost in Space, Game of Thrones). She will also serve as co-executive producer according to Deadline.

The series is still very much in pre-production and is reportedly shooting in Vancouver from November.

DEGNZ member Rebecca Tansley’s latest short film, The Finding, has been selected for the DC Shorts International Film Festival in Washington DC next month. Written and directed by Rebecca, the short film follows a teenager’s efforts to reconnect with her estranged father, forcing them both to confront a dark secret from their past.

The Finding was shot on 16mm film in Central Otago and Dunedin in between lockdowns last year. It is Rebecca’s second short film, following two feature documentaries and a live opera film.

The Finding is one of only 95 short films selected to screen at DC Shorts, the largest short film festival on the East Coast of the US. The festival runs from September 9-19, both in select cinemas and online (US only).

Congratulations to Rebecca and her team!

The NZFC has announced the ten screen storytellers who will take part in their 2021 online mentorship programme. Congrats to board member Renae Maihi and members Pennie Hunt and Matasila Freshwater!

Matasila Freshwater will be mentored by Briar Grace-Smith to further develop a feature film crime/comedy.

Renae and Pennie are alumni of the DEGNZ Emerging Women Filmmakers Incubator, along with Catherine Bisley and Hiona Henare who have also been awarded mentorships. Matasila is a participant in the Incubator this year.

The online mentorship programme is titled Hunga Taunaki ā Rorohiko, which refers to working with others and recognising that it takes more than one person to help achieve your aspirations.