You are here: Home1 / New Zealand

Anna Serner, the CEO of the Swedish Film Institute, spoke at the Big Screen Symposium a couple of weeks ago on gender equity.

In the short time she has been at the Swedish Institute, she has essentially delivered gender parity in funding for feature film. By parity, that means that 50 per cent of films are written, directed and or produced by women. As in New Zealand now, it was the number of women directing films in Sweden where the numbers were poorest.

At the same time Serner strove for gender parity, she also strove for higher quality.

“Our strategy is basically to have high demands, and clear goals. We look for films that either can reach a high national audience or will go to international festivals. Ideally, we’d love to have both!”

This demand for quality saw an increase in rejections for funding applications from both men and women, rising from 80% ‘no’ to 90% ‘no’.

Serner’s approach upset men and women. The men because they felt it was harder to get funding. The women because they wanted to be considered “directors” rather than “women directors” and because their funding applications were still being rejected.

This from the Brand Sweden strategy document:

Countries are dependent on the esteem and confidence of the rest of the world in their competition for tourists, investors, talent and the attention of others. Sweden is a country with a good reputation, but the world is changing rapidly and competition for attention is growing. A strong image of Sweden abroad is important for achieving political objectives, promoting trade, attracting investment, tourists and talent, and encouraging cultural and scientific exchange.

The Swedish Film Institute has a very interesting matrix for deciding whether or not to fund film and help project Brand Sweden. It takes a four quadrant approach. 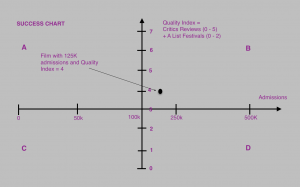 Quadrants A, B and D are the successful quadrants. C is for the duds.

For New Zealand, the number of Admissions would halve as we are essentially 50% the size of Sweden. And if we looked at NZ films, in A you would have films with niche audiences with high critical acclaim, such as the recent Inland Road and Stray. Sitting at the upper end of both axis in B would be Hunt for the Wilderpeople. Let’s not talk about C. And in D you would probably find the latest Pork Pie.

Swedish independent filmmakers target A and B and with considerable success. They had three films in Cannes this year (we haven’t had one since Christine Jeff’s Rain, 17 years ago). The breakout hit The Square is a definite B, as would be another great Swedish film Force Majure, both by director Ruben Östlund.

For Anna Serner, the Swedish brand is equally important domestically as internationally.

“The Swedish brand is very highly regarded internationally but not enough at home. So we have to fight harder to get the films to reach the audience, by branding Swedish films better and having a greater diversity of voices.”

Brand New Zealand is definitely talked about in Business and in some aspects of Arts and Culture, the Venice Biennale being one example. But it’s not integrated into a cohesive strategy. And it’s not consciously focused on in our film output. It’s high time this was done. 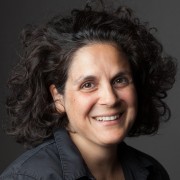 Directors & Editors Guild of NZ (DEGNZ) invites applications from experienced documentary directors with at least one documentary feature with festival success and a documentary project in development to apply for an International Director’s Mentorship with multiple award-winning Canadian documentary filmmaker Jennifer Baichwal.Jennifer co-founded Toronto-based Mercury Films Inc. with Nick de Pencier. For over 20 years, the pair has been making award-winning, critically acclaimed documentaries that have played all over the world.Jennifer is currently starting production on her latest feature documentary Anthropocene,the third in a trilogy of feature documentaries preceeded by Watermark (2014) andManufactured Landscapes (2006). Anthropocene follows an international group of geologists who want to change the name of our present interglacial epoch, Holocene, toAnthropocene in recognition of human impact.The International Director’s Mentorship is designed to assist a director with project development, career planning, creative relationships, new practices in audience engagement, and relationships with producers and agents.The mentorship will allow for a visit from Jennifer to New Zealand to spend up to two days working with the mentee on their submitted project, and 20 – 30 hours of mentoring time via Skype or phone across a six-month period.At a later mutually agreed date, the mentee will be encouraged to fly to wherever Jennifer is working to meet and observe.The overall intention of the mentorship is to inspire a NZ director, demystify the international film industry and offer genuine insight into creative process and engagement with the industry as a whole, while providing a solid platform upon which to build an international career.To apply, please provide:

A panel including Jennifer will select the successful applicant. An interview may be required.Only FULL DEGNZ members may apply. If you are not a member and wish to join, you can do so here: www.degnz.co.nz/join/ Applications should be submitted electronically to admin@degnz.co.nz no later than9AM, 30 November 2015.

The Directing Actors Workshop provided the opportunity for the directors to see each other work and then to analyse that work in a supporting and safe environment with a focus on positive feedback.

Our thanks go out to actors Cameron Rhodes, Mark Clare and Lucy Lever for their participation and the valuable contributions they made to the day.